During the month of May, 1861 the companies comprising the Third Georgia regiment, were brought together in one camp, just outside the walls enclosing Gosport Navy yard. Adjacent to this camp, christened "Camp Gwynn," in honor of the Department commander, was an extensive open field, not then in cultivation. On this large parade ground, in morning and afternoon of each day, in squads, by companies, and as a regiment, these men were constantly drilled, that they might become effective soldiers. And while this work was irksome, the thorough training here received, was afterwards apparent upon every battle-field upon which this regiment was marched.

Early in the month, at an assemblage of the commanders of companies of the regiment, Col. Wright stated, that his good wife desired to present the regiment with a handsome stand of colors, and requested the officers present to submit designs, from which a selection would be made. Among those submitted, was a design by Dr. A. E. Andrews [brother of Capt. Andrews of Co. D], then serving with the First Georgia regiment at Pensacola, which was adopted. As we are unable to give a cut of the design, we will endeavor to describe it, as best we can, so as to recall those sacred colors to the mind of every surviving comrade.

The design was a medallion, consisting of three pillars, "Wisdom, Justice and Moderation," spanned by an arch, on which was lettered "Constitution." The waving sea made the foreground, and the mountains were shown in the background. This medallion was surrounded by a wreath of wheat and corn, on one side; and by a wreath of the cotton plant on the other. Where these wreaths met beneath the medallion, they were joined by a ribbon, with streamers to right and left, on which was lettered, "Presented to the Third Georgia regiment by Mrs. A. R. Wright, 1861.

On the reverse side, was a similar medallion, in the centre of which was an arm clan in mail, drawn into a position to hurl a spear, which the hand firmly grasped. Around this medallion on one side was a wreath composed of oak leaves, and on the other side was a wreath of the laurel. These wreaths were united beneath the medallion, by a ribbon and on these streamers was this motto, "Pro Aris et Focis."

From this design a large flag was painted on heavy blue silk by an artist of Norfolk. In the presence of the soldiers composing "Blanchard's regiment," and many citizens, the flag was presented to the regiment, in the name of Mrs. Wright by Gen. Huger, in front of the court house in Portsmouth. It was carried by the regiment until May 1863. At this time, as it was so worn and tattered, Col. E. J. Walker, then in command of the regiment, had it carefully packed, and forwarded to the governor of Georgia, to be kept in the archives of the state. But we have reason to believe that the Georgia Hospital Association, in Richmond, to whom it was consigned, failed to forward it to Georgia, and allowed it to remain stored [away with soldiers' baggage] in Richmond, where it was burned upon the entry of the Federal troops into Richmond in April, 1865.

John G. Coffin - Augusta, GA.: Coffin was a local painter who, in May, 1861, painted a Georgia state banner for the Blodgett Volunteers (Co. I - 1st, 3rd Georgia Infantry). 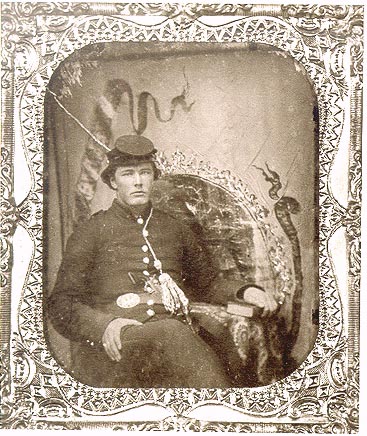 Alexander Langston, color bearer, 3rd GVI, Co. C in
front of their 1st flag
By permission of the Georgia Capital Museum
Thanks to Greg Biggs